Silvia lives in Church Row in the village and she keeps her Mini parked off the main road in the lay-by opposite her house.  Despite being parked safely on the morning of Frid 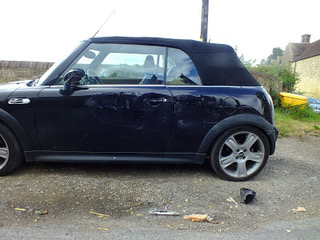 ay 30 June Silvia found the side of the car severely damaged as shown in the photo.
A witness told her that the damage was caused by a white bus carrying children at about 9:15 – 9:30 in the morning.  After the incident a taxi driver stopped the bus driver to advise that the bus had hit the car and its left rear list cluster had fallen off.  The bus driver chose to ignore this and drove away to the A420 junction, turning right towards Oxford.
If you saw anything of this incident or of the damaged bus please contact Silvia via email silviamartinsdias@hotmail.com or phone 07760451118.

There are no comments yet.