Did you know Bourton has a club?

Yes that’s right; your village has a club!  Here’s the story…

Bourton Working Men’s Club was originally started in the Long Room in what is now Pinewood School.  It was very much a club for men:  women were only invited in for special occasions.  During the 1960s the club was located in a building behind the Old Forge, next to the Pin in the centre of the village.  It proved such a success that during the 1970s the club was able to expand into larger premises and the current club was built (on Church Road, next to the old vicarage for those who don’t know!).

Initially the club Steward was housed in a caravan in the car park although the club’s continued financial success allowed for the flat above the club to be added and later, a function hall.  Although by this time women were allowed to join as members, we changed the name to simply “Bourton Club”, to dispel the misconception of being only open to ‘working men’.  And later we decided throw open our doors to families and family dogs.  That’s right – everyone is welcome at Bourton club! 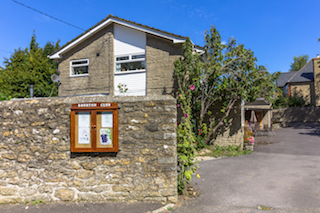 The club is a hidden gem within the village which sadly is not used by many of the villagers of today.  But that’s something we hope to change.

There’s a lot going on at the club..

We are now committee run with currently eight committee members who are all working hard to keep the club running successfully and supporting the local community.  Over the past couple of years new committee members were appointed and recently we have refurbished both the bar and the functions hall: we are striving to hold large functions as often as we can and are always open to any suggestions for future events.  The club is also home for league pool, darts and dominoes teams.

We hold a weekly bingo on Sundays with a meat raffle on Saturday and Sunday evenings and there’s a craft club on the first Wednesday of the month from 19:30 to 21:30.  We have bands and other artists playing on some Saturday nights and the function room is available for hire for private functions.  There’s also an old-style skittle alley available to members and for hire.

Why not drop in and find out for yourself?

Bourton club has a lovely relaxed atmosphere with a family feel; you’re welcome to drop in at anytime to discover for yourself what the club has to offer.  Membership is just £14 per year, £7 for pensioners and with junior membership available to young adults from 16 years of age.  We’re keen on hearing your views on what else we can provide:  try our Facebook page, give us a call or better still just drop by!

Wednesday  Closed (except for 1st of month for craft club)

There are no upcoming events at this time.